my own QuietRock story...plus someone else's

At the end of this post, I'm going to link yet another YouTube video. It's a TV story about some people who tried using QuietRock to replace some of the original walls in their townhome, which was shockingly un-soundproofed, and they were featured on a home-improvement show -- so it's a bit slicker than my own photos.

First, here's my own story:

I live in a building that was built in the 1950s, and the contractors used the thinnest, cheapest materials with no real soundproofing whatsoever. For example, the building had no insulation in the walls or ceiling, the walls are built of 2x4 studs with a single sheet of 1/2" gypsum nailed on each side, and the floors are merely thin planks of hardwood nailed directly on top of a plywood sheet, which is nailed right on top of the wooden joists. In brief, it seems that I had moved into a wooden tent.

As a consequence--if you don't add any kind of soundproofing, noise travels easily from apartment to apartment by a network of wood, which allows you to enjoy the sound of your neighbors walking, opening and closing doors and drawers, blowing their noses, talking, and more than you'd ever want to know about them. It doesn't matter if they're above you, next door, or below you -- you can hear all of these things from any direction.

When I first moved here 10 years ago, I didn't understand the principles of soundproofing at all. I had a local company come in and blow cellulose insulation into some of the wall cavities. Basically, they punched holes in the gypsum and left the drywall intact, then blew in fire-treated cellulose fluff, and then patched up the holes in the drywall. I thought that would make it soundproof. Well... it did muffle some airborne, distant noise (say, 1/2 a block away). But it did nothing to stop adjacent neighbor noise, and certainly didn't stop impact or vibration noise. (It did help, however, with warmth.)

After time, research, and the infusion of new products into the marketplace during the last four years, I'm slowly adding and revising things in my flat, which has given me an opportunity to experiment with products. I didn't know what would work and what wouldn't, so I've done a little at a time.

One of these products was QuietRock drywall. In these photos, you'll see where I removed the original gypsum on two walls of a room -- one of them is an exterior wall, which touches the building next door -- and replaced them with 5/8" QuietRock 525. These two walls didn't have the blown-in cellulose in them earlier, so I added CertainTeed fiberglass batting between the studs before adding the QuietRock. I wish I'd known at the time about sound-isolation tape, which you can apply to the studs before you add new drywall, because I bet that dampening would have helped, too. Anyway, as a result, I've reduced quite a bit of incoming noise, and I know that a lot of my own activity -- particularly talking and music -- is not going out of the room from these walls.

QuietRock 525, according to the marketing materials, is said to be the equivalent of 8 layers of gypsum board. Do I believe that? I don't know. I would say "maybe 3 or 4," but I don't know what 8 layers of gypsum would sound like. I would expect it to be impenetrable, like a fortress, and would certainly reduce the size of a room significantly....

There are some mysterious noises that still pass through. The guy in the building next door tends to pound and bang on his adjacent wall, and I can hear that. I have no idea what he's doing, and thankfully, it doesn't happen all the time. His building touches mine on the outer wall that you'll see in one of these photos (the one with the waxy paper between the studs). Look at how shallow the wall is -- and imagine it with only a piece of 1/2-inch gypsum board on top. That was all that separated me from the outside world, or in this case, the building next door.
I'm also including a photo that I took of a cross-section view of QuietRock 525 to show it side by side with a piece of 1/2" gypsum, so you can see the difference in thickness and materials. The QuietRock 525 is on the left side. There seems to be a layer of concrete or something on the QuietRock, which is fused to regular gypsum. After the photos, you'll see the commercially produced "testimonial" video (not mine) that was apparently on TV. 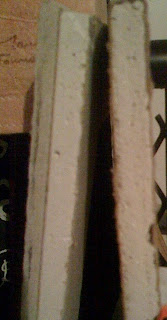 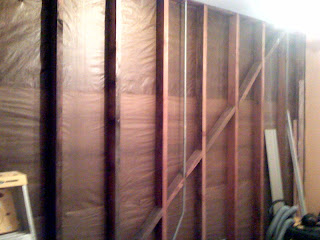 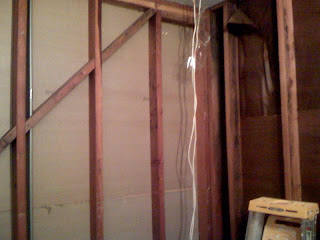 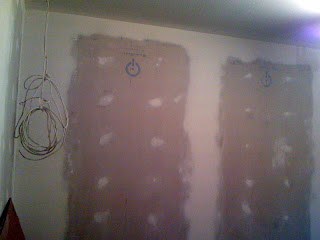 Popular posts from this blog

Blow-in cellulose and your hollow walls

June 21, 2014
It's not too late to insulate.  A few years ago, most American homes had no insulation in them. When a homeowner did insulate, it was usually with fiberglass batts. Then along came some better products. One of them is blow-in cellulose insulation. Does it work? I can attest to this: YES. I've used it in walls and ceilings, and it works quite well for airborne noise. If you live in an uninsulated home and you hear your neighbors voices coming through your walls or ceilings, cellulose will dampen that noise or mute it entirely. It doesn't work for all types of noise. But it doesn't eradicate impact noise. You might still hear the sounds of someone walking across a bare hardwood floor with their shoes on, for example, or hear wall-mounted cabinets opening and closing. There are other solutions for that, and by combining different solutions you can control most structural noise and create more privacy. Low cost Blow-in insulation is inexpensive. You can hire a
Post a Comment
Read more

Combining QuietRock and Green Glue together

May 21, 2009
Two great products work great together. As I've mentioned before, I'm experimenting around with ways to reduce some of the noise problems in my apartment on a tight budget. I think I've found the best combination to date: adding a layer of QuietRock 510 over an existing layer of gypsum drywall with a layer of Green Glue inbetween. This was sort of the best of both worlds: taking a pre-made, sound-dampened drywall and then adding it over a powerful, viscous layer of glue....onto drywall that was already on the wall studs. No demo needed. In this project, I basically added two sound-dampening layers to the original 1950s drywall (one layer in the QuietRock and the other layer created by the Green Glue) to address " flanking noise ": feet, furniture, and shoes pounding on the bare floor of my downstairs neighbors' apartment. The amount of banging, bashing, and foot-stomping sounds coming from their very "wooden" apartment has been severe, and I&
10 comments
Read more

December 03, 2017
I liked this video from Roxul because the presenter clearly explains the difference between the two types of noise: airborne and low-frequency noise, which I will add to here. The lower frequencies travel through the wood studs. A low frequency travels from your wall surfaces, floors, and ceilings if they sit directly on those studs. Lower frequencies include bass from your stereo, impact sounds from walking or pounding, trucks driving outside, and maybe the spin cycle on a washer. Roxul  insulation mitigates the other kind of noise -- airborne noise -- which can include talking and TV (without bass). This insulation product is dense and does a really great job of blocking airborne noise. However, used alone, it doesn't stop low-frequency noise. The presenter shows how to insert Roxul batts between the studs, which you've seen before. Then he installs a resilient channel to keep the drywall from touching the wood studs. The resilient channel's job is to reduce the lo
2 comments
Read more